A day in Bologna!

Kevin met me in Bologna after my trip to Rome and I think it’s safe to say that climbing the big tower is not in my future, after spry Kevin swore that he would never do that again! 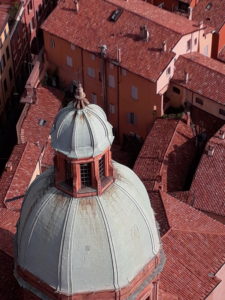 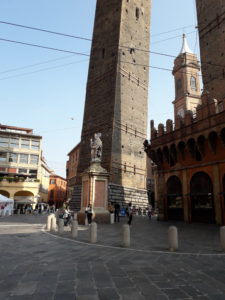 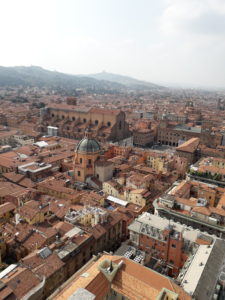 View of Bologna from atop the tower

Bologna is home to the oldest university in the western world and it felt like every student was strolling around when we got to the historic town center. We learned that in the old days, even when the various regions were feuding, the respect for learning and education was so great that students traveling to Bologna to study were given free passage through the warring regions! 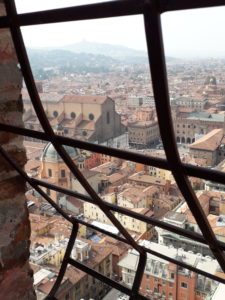 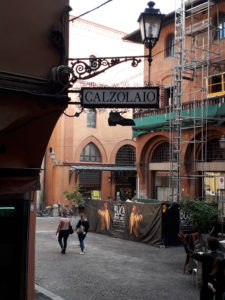 The first day, we visited a museum that focused on the history of the region, which gave us our bearings.  We ate at a good restaurant featuring both a ‘mountain’ and a ‘city’ menu, A Balus. https://abalus.business.site/I had the medallions of venison seared in truffle oil, while Kevin tried the classic Bolognese pasta dish.  I watched as another person ordered the fried egg with truffles shaved on top- they bring it out covered in a glass dome, with steam fogging up the glass.  Then they lift the dome with great drama.  I know I need to try more truffle dishes to see what the fuss and bother is about, but I’m not sure I’m going to start by sampling the truffles over a fried egg!  Convince me that I’m wrong on that!

The next day we took a walking tour of Bologna, which was fun. 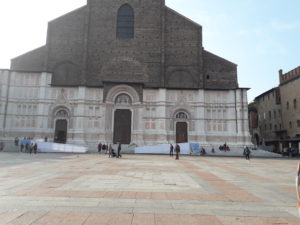 More churches, the famed towers, and a statue of Neptune were along the way. As you can see from the church photo, it was not finished, after hundreds of years of work.   You see, various popes in Rome did not like that this church was being built (and largely paid for) by the common people of Bologna, rather than dictated by them, so they threw up many obstacles to its completion. One such obstacle is that they bought up land next door and built a large adjoining building so that the cathedral could not be built in the typical style of a cross (long aisle down the middle, with alcoves on the front left and right). The church looks from the outside like it was cut off, which is essentially what happened. Still, it is beautiful on the inside and you can see the pretty marble on the bottom half of the church on the outside. 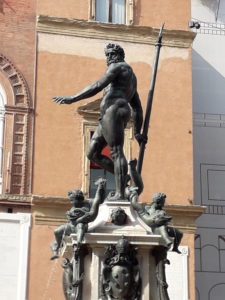 We visited an old library still in use today, as well as a very old ‘anatomy classroom’ where students were able to watch autopsies to learn about the human body and medical treatments. 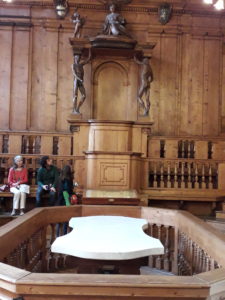 For reasons that are hopefully obvious to you, in the old days this classroom was only in use in the winter time…. . Bologna was heavily bombed during World War II, but thankfully many of these rooms were saved or spared. 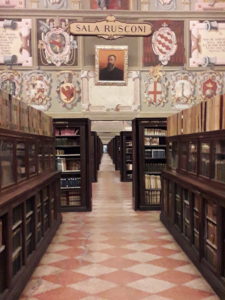 An old library, still in use!

The town is small and cute- for lunch I tried another dish well known in the area- tortollini in broth.  It was a beautiful day and we were seeing another fun spot near Milan, so we were happy. The next time we venture in the area, I want to get to the neighboring towns of Parma and Modena, to see how the parmesan cheese is made, as well as the famous balsamic vinegar we all love so much!

Rome in the Rain