Under the Tuscan Sun, with 68 Middle School Students

Ciao a tutti.  This is Kevin with an update on my first Italian field trip to Tuscany.

I have now checked off a few items on my bucket list, such as:

Students and chaperones jumped into 4-wheel drive jeeps and went to the Carrara marble quarry, famous for its high quality marble. It is where Michelangelo found the marble for his David statue.  [This is where Kevin, the science teacher, wants to talk about how marble is a metamorphic rock that comes from limestone, a sedimentary rock, when the limestone is exposed to tremendous heat and pressure.  But, thankfully, he won’t.]

Getting to the top of the quarry was tricky.   It was rainy and the roads turned into milky white rivers of water mixed with marble dust.  We even went through a tunnel of solid marble.

The views from the top were impressive. 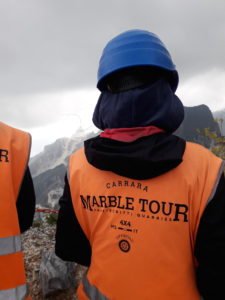 Students also met with a sculptor and learned how to carve marble.  Many left with a greater appreciation of how hard it is to create a statue out of stone. 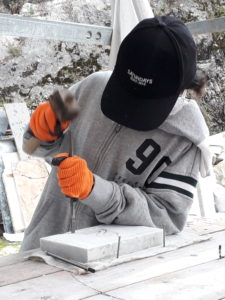 On Tuesday and Wednesday, the students rotated through 4 different activities, one in the morning and one in the evening on each day.

One excursion was to La Grotta del Vento (the Cave of the Wind). It was discovered when a group of kids walked by the small opening in the mountain and felt a strong wind blowing. [Here is another spot where Kevin, the science teacher, wants to discuss how differences in air pressure cause wind. In summer, the cold air in the cave (which has a higher air pressure) rushes to the hotter air outside (which has a lower air pressure).  But thankfully, he will not discuss it.]

Students enjoyed seeing the stalagmites, stalactites and the formations that looked liked sheets moving in the wind.  It was quite a hike to the bottom of the cave. 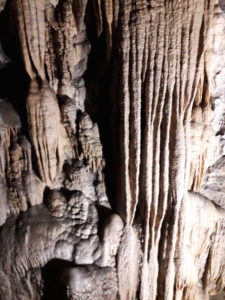 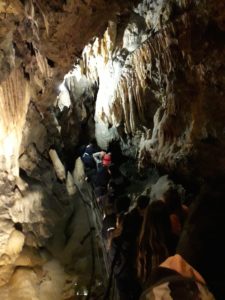 Another workshop was all about cooking. Some students made gnocchi, some made pizza, some made pasta, and one group made tiramisu.   The food created during the cooking class was served to us at lunch or dinner.  On tiramisu night, the students made a special tiramisu for a student who was celebrating his birthday.  After singing happy birthday in Italian (we sang it in English at breakfast), the kids continued singing with:

And when the students finally got to “Are you twelve?” the birthday boy moved his arms out sideways (like a conductor ending a song) and the room became silent.  I never experienced this extension of the birthday song but it was pretty neat to see it in action, although it might be a little too much of an extension to do this on my birthday!

If you are wondering about how to sing happy birthday in Italian, here are the lyrics:

At the Puccini workshop, the students learned more about opera, although most of them had already been to La Scala and all knew more about opera than I do.  They watched bits of Puccini’s one act opera, Gianni Schicchi, and had a chance to add another ending to the story.

For the ropes course,  another teacher and I volunteered to take a group to Canyon Park and zip line back and forth across the canyon, with a beautiful blue river below.

[Here, Kevin, the science teacher, wants to discuss the fear of falling into a canyon when he is chaperoning a group of students, and how he was told there was a beautiful blue river below him which he couldn’t see because he was afraid to look down. But thankfully he won’t.]

I was the last one to go, and I followed a student with whom I was sure that I could keep up. However, I quickly realized that I was no match for him.   The zip line part was fine and shouting “libero” (meaning “free”) when you moved off the landing platform was enjoyable. But I did not like the Tibetan bridges which are made of a single cable for your feet and two higher cables for your hands.  Shimmying across the canyon on that tiny cable was not fun, although we were safely harnessed in at all times.  The highlight of the trip was a student who told me that walking across the cable was no big deal. He had done it on a bicycle on a ropes course in Russia.

So, as if that was enough excitement for the week, the students ventured off to the medieval city of Lucca for a scavenger hunt on Thursday.  It is a beautiful walled city with towers and a Roman amphitheater (“anfiteatro romano”). There were 5 groups of students, each dropped off at a different point in the city.

Two students were allowed to have cell phones so they could document that they had accomplished their tasks.  Chaperones were there to shadow the students but not help them find anything. Students could do the tasks in any order, but thankfully all chose the task “Get a Map” as the first step.

My group of students, after a few wrong turns, found Guinigi Tower and climbed to the top to write a poem, with each student adding a verse.   The top of the tower has a few beautiful trees growing at the top and some of the best views of Lucca.

Much to my dismay, the students decided to climb the Clock Tower as their second task.  They had to make a clock out of materials they had brought with them.  My group made a working sundial, without any help from me, which was very clever.

The students also created and sang a mini opera in the center of the anfiteatro romano and biked on top of the wall of Lucca.  The perimeter wall is very wide and tree-lined.  The group decided to go around twice because it was such a beautiful day.  We were going to end the scavenger hunt with gelato, but the group opted for bubble tea.

Friday was time for packing and heading back to Milan.

I enjoyed having the time to get to know my colleagues a little better.  I really don’t have time during the school day to see much of them because we don’t have common planning time.  Also, it was nice for the kids to be able to make friends with other students in their grades, since we have quite of few new students each year. Overall, it was a good week.

[Here is where Kevin, the science teacher, says goodbye so he can plan his lessons for next week.]

Venice After Lockdown-Quiet and Beautiful

After our boat trip along the Brenta River from Padova to Venice, we decided to spend a few days in Venice. It was very different from my visit in 2018. I doubt that we will ever see Venice again in this state of virtually no tourists- only locals and some Italians coming from nearby areas. September 2018September 2018September 2018 June 2020 June 2020Around St. Mark's Square- 2018 and ...

Padova (or Padua): Giotto frescoes and an historic Botanical Garden- A Day Trip from Milan

As Italy continued to open up its regions after the Coronavirus shutdown, we left the Lombardy region to visit nearby towns accessible by train. Padova was on our list because of its famous botanical gardens and the Cappella degli Scrovegni where renowned frescoes...

Vigevano and the Museum of Shoes- A Day Trip from Milan

Home at Last! Vigevano! On the recommendation of a friend, one of our last fun trips with Mom on this "Mother-Daughter Trip of 2019" was a day trip to Vigevano from Milan, known as the "Ideal Town"; home of a modern-day "Museum of Shoes" and boasting...

Vienna: A Mother-Daughter Trip to Remember!

By the time Mom and I made it to Vienna, we were ready to slow things down a notch. The View from our Vienna AirbnbThe Vienna CathedralOutside the Vienna Cathedral Still unusually cold and rainy for May, we walked the streets of Vienna from our upscale ...