Our much anticipated day trip to Alba, Italy for the 88th International White Truffle Fair was everything I had hoped it would be! 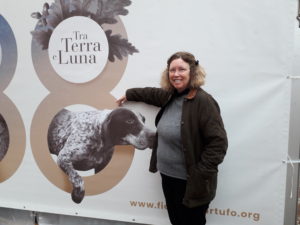 It felt like visiting a local fair in the southern United States- there were educational lectures, book signings, chefs showing off their favorite recipes, booths with food samples, hunters dressed up in their work clothes (in this case, the truffle hunters), dogs to pet and enjoy, and of course, the proud and all-knowing judges!

Unfamiliar smells wafted throughout, as we walked from booth to booth, sampling products infused with truffle- from truffle oil to truffle butter, truffle pasta and truffle potato chips- after which we tried the famous regional wines from small wineries with booths (barolo and barbaresco among them), and of course, the smell of whole truffles available for sale (sadly, no free samples of those!).

The festival lasts from early October through the end of November and people come from all over the world to sample and buy the truffles. If truffles and good wine are your thing, then check it out some time. www.fieradeltartufo.org

Fun facts taken from the brochure we received at the festival:

We had a marvelous times looking at the truffles under glass (like one would view expensive jewelry), watching the truffle hunters explain and offer a sniff of their truffles, and of course enjoying the truffle dogs around the tent.  We also thoroughly enjoyed meeting the family members offering wine tastings of their special wines.  Being the nerd that I am, I think next year we will try to get there earlier to attend some of the lectures about truffles, and perhaps I will even sign up to participate in a truffle hunt!  It’s about 150 euros for 4 people, I think.  Like fishing, I suppose, they can’t guarantee that we’ll find one, and unlike fishing, I don’t think you can take the truffle home with you (unless you pay a pretty penny).  The prices of the truffles I saw ranged from 150 to 500 euros.  We didn’t buy one, but I think it would be fun to get a 300 eur0 one and split it among 10 people.  You’d have to buy the truffle slicer too, but what fun would it be to actually take one of these home and try it!  I suspect after a week of all things truffle, you’d get sick of it.  But how cool would that be?

The day was loads of fun and we will definitely be returning next year!