Duomo (and Kevin on a morning run)

A visit to Paris would not be complete without paying homage to the Notre Dame cathedral, particularly now that we have a hometown frame of reference in the Duomo in Milan! 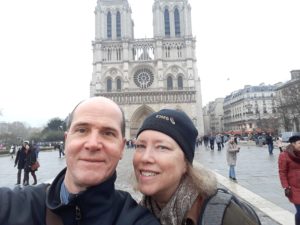 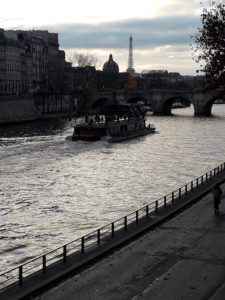 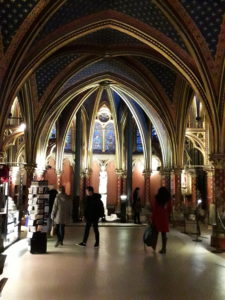 Sainte Chapelle- where the Crown of Thrones was displayed!

With limited time in the city over the long Thanksgiving weekend, we chose to spend one afternoon revisiting the Notre Dame cathedral and seeing for the first time Sainte-Chapelle nearby.  Many friends recommended that we take time to visit the ‘chapel’ that was built between 1242 and 1248 in accordance with the wishes of King Louis IX in the Palais de la Cité. 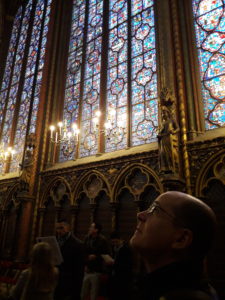 The Palais at the time was the residence and seat of royal power (it held this honor from the 10th to the 14th centuries), and it is now part of the Palace of Justice.  Inside the church is a computerized interactive display that shows what the area looked like during that earlier period, with gardens, separate tunnels that allowed the king and queen to go to and fro without being seen, and courtyards accessible only to people of certain bloodlines and hierarchy in the social order. Sainte-Chapelle was built to house the relics of the Passion of Christ.  The most famous of these relics was the Crown of Thorns, acquired in 1239 for a sum that greatly exceeded the cost of building the Chapel itself!  When you see the Chapel and its grandeur, you will wonder in today’s dollars what that price must have been. 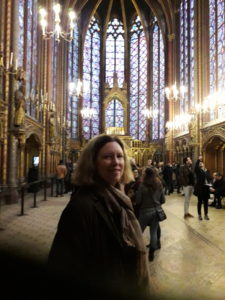 These Holy Relics had belonged to the emperors of Constantinople since the 4th century.  In purchasing them, Louis IX added to the prestige of both France and Paris.  The relics were originally displayed and worshipped in the upper chapel of Sainte-Chapelle (which is where the stunning stained glass windows exist, laying out scenes from the Old and New Testament in chronological order). Only the king, his close friends and family, and the canons leading the services were allowed in this room.  The lower chapel was the worship site for the palace staff. In the upper chapel, there are 1113 scenes depicted in 13 stained glass windows. You are to read the scenes from left to right, from the bottom upwards.  I have to admit that as one gazes towards the top of the windows, it was hard for me to easily identify the scenes.  The scenes are small and intricate.

More on the Crown of Thorns that fascinated us.  First, the great shrine that contained the 22 relics of the Passion of Christ in this upper chapel, (including a fragment of the Holy Cross and the Crown of Thorns) was melted down during the Revolution (thankfully the stained glass windows in the upper chapel were not destroyed).  The relics are now kept in the treasury of Notre Dame Cathedral where the Crown only appears for public viewing on special occasions.

Possessing the Crown of Thorns was a big deal and kings and queens throughout Europe wanted to see and worship this and the other relics the French royalty owned.  The ultimate gift to show loyalty and friendship from King Louis IX was when he would remove one of the thorns from the Crown and give it to a King and a kingdom. Of course that means there are little thorns throughout Europe in churches everywhere, supposedly originating from the Crown now in Paris.  We were surprised to learn that the Crown is currently located in Notre Dame- neither of us had heard that before.

Suffice it to say that we enjoyed visiting a new place, and catching up with old memories from the Notre Dame cathedral, and hearing some beautiful music from a choir singing while we walked around.  We also  paused at a statue dedicated to mothers who have lost a child at a nearby church.  We said a prayer and marveled at the preservation of these beautiful places of worship. And unlike the Duomo in Milan, entrance in the Notre Dame cathedral is free for tourists! 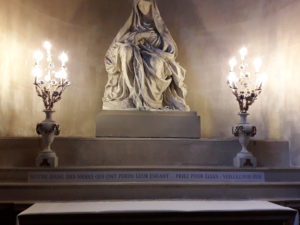 Statue inside a nearby church- inscription (translated): Our lady of mothers, who lost their child, pray for them, watch over them. 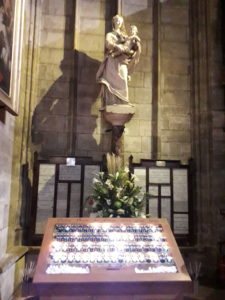 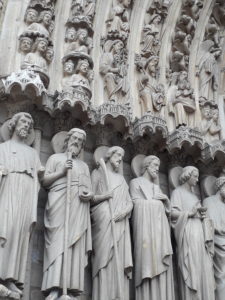