I ventured out on my own from our temporary apartment to the center of Milan, with high hopes that I could navigate the tram, Google Maps, and the hot summer streets of Milan. 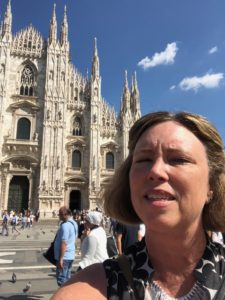 If mishaps and detours make us stronger, then I have boxed higher than my weight class and look forward to learning from today’s mistakes!  I haven’t yet had to buy my own tram ticket, which I’m sure will be another funny event, but that didn’t stop me from making my first (among many) rookie mistakes.  I confidently boarded the tram heading towards town, with Google Maps supposedly prepared to guide me to the exact spot with I should exit by the Duomo.

Lesson 1: Don’t just rely on technology and study more before boarding for your trip!  Try as I could, I could not keep up with the map and the tram stops on the Google map.  On occasion, the map would say “rerouting” which is a bit nerve wracking when I was told the tram would end at the Duomo.

Lesson 2: Sit on the tram where you can look out and actually use your eyes for navigation!  So embarassing, but I actually didn’t see the Duomo cathedral spires as we stopped for what appeared to me to be a smoking stop for the driver.  No flashing sign for naive me to say “Alert, solo tourist!  This is the Duomo where you want to get off!” Instead, my Google map kept showing more stops and I foolishly sat there wondering when the driver’s smoke break would end and we would start again.  Off we went and it was eventually clear to me that I was heading back to my original starting point by our apartment.  I mustered up the courage to tap the nice woman sitting next to me and I tried to say that I am new to Italy and do not speak Italian very well, but where is the Duomo (gesturing behind me because I was pretty confident that I was going the wrong way).  I had the words I was speaking on my phone through Google translate and she saw that I had the words on my phone, which prompted her to dig furiously through her big purse to find her reading glasses to read for herself what the heck I said.  Even I couldn’t butcher the phrase “where is the Duomo” in Italian, so the guy behind me leaned forward and confirmed my fears. He gestured that I needed to get off, cross the street, and return in the direction from whence we came.  Sigh.  With head hanging low, I did just that, this time seated far enough back that I could actually see where we were going, and I could read the electronic ticker that helped me keep track of the stops.  I caught a glimpse of the Duomo as we pulled up and exited at that same spot where the prior driver had stopped for a smoke.  I’m reminded of the Miley Cyrus song, “It’s the Climb” which I hope to keep to heart during this multi-year adventure.  It’s not just the destination that I should cherish, but what it takes to get there.  I will learn and experience life as we go.  How nice of the tram riders to help me!