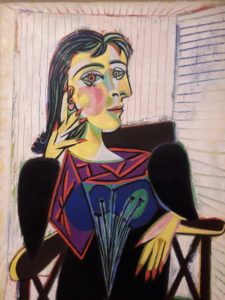 Rather than line up to revisit the Louvre or the Musee d’Orsay on our recent trip to Paris, we decided to explore the Picasso Museum, which was a first for us both.  We were not disappointed! 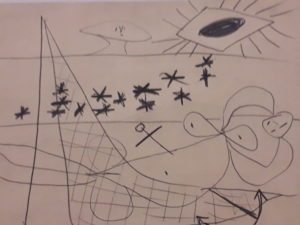 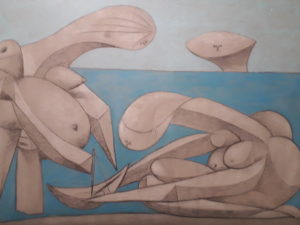 Our AirBnB was around the block from the Picasso Museum, so we picked a cold rainy morning to visit.  http://www.museepicassoparis.fr/en/ Our interest in Picasso was piqued because we had recently watched the National Geographic TV series called “Genius” with Season 2 featuring Picasso. It is a nice introduction to Picasso, particularly focusing on his complex relationships with the many women in his life and their influences on his art. I encourage you to watch it!

Picasso used African masks in many of his paintings, which can be seen in the tapestry of Picasso’s painting entitled Les Demoisselles d’Avignon.  This large tapestry (and the original painting) portrays five nude prostitutes, with the figures on the left having facial features in the Spanish style, while the two on the right are shown with African mask features. Picasso said the use of the racial Primitivism found in these masks moved him to “liberate an original style of compelling, even savage force.” Again, what is so interesting about the exhibit is that around the room featuring this tapestry are sketches and prior drafts he worked on before deciding on his final painting.  In some of the sketches, he has men drawn in the painting, but he has said that he decided to focus only on the women and the men would have been a distraction to the feature of his work.  It’s wonderful to have the backstories from Picasso himself, and to see the iterations from vague concept to final painting throughout the Museum. The original painting itself is in Spain. 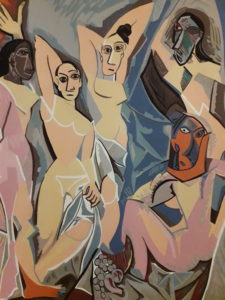 Les Demoiselles d’Avignon (The Young Ladies of Avignon), 1907- tapestry of the original painting 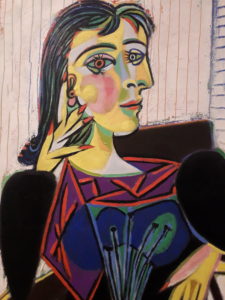 Among the various themes found in the Museum, one can view paintings from Picasso’s Harlequin period and observe the development of his cubist work. 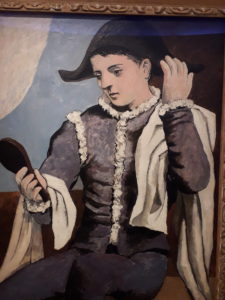 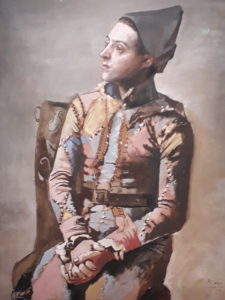 I also loved that you see some of his paintings before he went in the cubist direction. 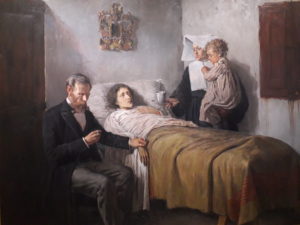 Picasso grew up in Spain and went to an art school as a young boy, where he studied classical painting.  His father had been a professor of painting and when Pablo showed early talent, his father encouraged him with a strong academic background in painting.  His father even rented a workshop for his son and it was there that Pablo Picasso painted Science and Charity.  At the age of 15, he entered (and placed in) a competition with this painting, which gave him early recognition, with his winning painting depicting a scene of a dying man, with a physician, a nurse/nun and a young child surrounding the deathbed.

A beloved sister of Picasso (Conchita) died of diphtheria at the age of 7 in 1897, and another died from cholera when she was an infant.  His hometown endured a terrible cholera epidemic during this period and the themes of death and the role of doctors in his family’s life greatly influenced his perspective, including this painting, he said (an uncle was a doctor as well, and the physician uncle financed much of Pablo’s schooling).  Not only is the painting itself beautiful, but the Museum also exhibits Picasso’s many sketches and developments of the themes of the painting before he completed it.  You feel like you are watching his mind at work! The Museum also has an x-ray of what is beneath the final painting, which shows us how Picasso continuously modified the painting all the way to the end.

Pablo has also said that his sister Conchita’s death inspired him to seriously pursue his passion for art.  At the time of her illness, the diphtheria antitoxin was available to wealthy urban Spanish families, but it could not be obtained in time to save Conchita, and the family could not afford to even give her a proper burial.  Now one might understand better an inscription accompanying a later print of Picasso’s related to this painting: “At the end of the road death waits for everyone, even though the rich go in carriages and the poor on foot.”

There are multiple floors to the Museum housing a number of Picasso’s most famous original paintings, as well as his many sketches and notebooks filled with drafts and concepts that show his thought process in developing an idea for a painting.  The Museum also contains copies of paintings from other famous artists whom Picasso admired and studied.

We even saw sculptures and toys Picasso made for his own personal garden, which neither of us had seen before. 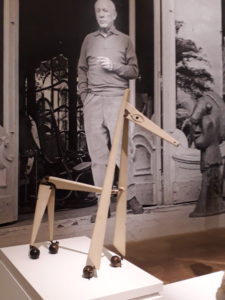 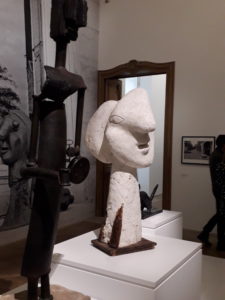 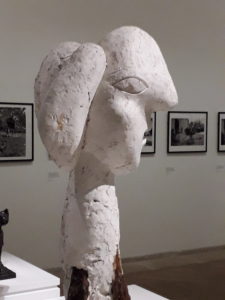 If Picasso had simply painted in a style like everyone else, he would have been a good painter, no doubt, but by developing his unique style, he became the great, famous painter we know today. Visiting the Museum was a perfect way to spend an afternoon!