My Love of Michelangelo!

Here’s a common ice breaker question: If you could have dinner with an historical figure from the past, whom would you pick? For me, besides Jesus (I know, might be a bit ‘churchy’ for some of you…), it would be Michelangelo.

Sistine in the round

One of my favorite books is the biographical novel of Michelangelo Buonaratti, The Agony and the Ecstasy, by Irving Stone. I urge all my friends to read it before they visit Rome and Florence, and many placate me and read it, while others just boldly say no (I’m talking to you, Pete!).  It’s no longer in print, so it’s hard to find, but it gives you the flavor of the Italian Renaissance period and the complex life of one of the greatest artists ever.

Besides the Pietà sculpture found in Saint Peter’s Basilica in the Vatican and the David statue found in Florence, I never tire of Michelangelo’s work in the Sistine Chapel.  It took him 10 years to complete his part- 4 years for the initial assignment of the ceiling, and 6 years for The Last Judgment, over 25 years later.

He turned down the assignments multiple times because he considered himself to be a sculptor, not a painter.  It’s not too strong to say he was basically forced to paint the chapel by powerful popes.  But what a legacy he left behind as a result!

I’ve been privileged to visit the Sistine Chapel in private settings twice, and each time was magical.  The first time was in 2002 with both girls, Kevin and Grandma Suz.  Our guide Ludovica passionately described the process of Michelangelo’s work, the political intrigue and egotistical battles he had with various popes during his lifetime (the ego was present on all sides), and the present day use of this same space to select a new pope.  The girls were tired from our trans-Atlantic flight, but Ludovica weaved a tale that captured their attention while we sat alone, just the 6 of us, in the Chapel, soaking in the history and beauty of it all.

The majesty of the Sistine Chapel

Having an opportunity to spend time in the Chapel again, 16 years later, was equally precious.  After we exited the Sistine Chapel, we passed by the ‘keeper of the keys’! 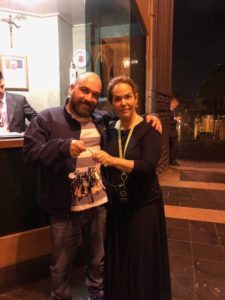 The Keeper of the Keys! Vatican Museums

He and his staff open and close all the Museum doors and you can now accompany them on a tour- I think that sounds like fun. Maybe some day I will sign up for the opening of the rooms!

After Rome,  I met up with Kevin in Bologna, and we were surprised to learn that Michelangelo also spent several years living in Bologna on two separate occasions (he needed money after his benefactors in Florence fell on hard times).  On his second trip to Bologna he was summoned by the newly elected Pope Julius II to create a gigantic bronze statue of him to be placed on the cathedral under construction.  The statue was destroyed 3 years later after the Pope fell into disfavor- the bronze statue was broken into pieces and the pieces were sold to the Duke of Ferrara and melted down to make a cannon, named Giulia.  Just imagine if that statue had survived! There are no known sketches or imitations of the statue for us to see today.

Please come and view Michelangelo’s work, read the book I mentioned, and discover why I want to have dinner with him!

Rome in the Rain