After a tough 5 weeks of apartment hunting, we have finally settled into the place we will call home for the next 2 years, and we couldn’t be happier!  Well, come next summer, we might be happier with air conditioning, but you can’t always get what you want, right, Mike Jagger? 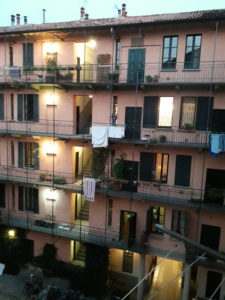 The housing market in Milan is really tight right now, especially in the area where we decided to live, which is in the south side of town, nearer to the tram line that gets Kevin to school.  We searched high and low, including in the hip area where the young folks party into the wee hours of the morning, which is called the Navigli area (named for the water canals that were built to bring the marble into Milan from the mountains when the Duomo was built hundreds of years ago, with the canals being designed by Leonardo da Vinci!).  How do we know this is the hip area?  In addition to hearing about it from others, we experienced the nightlife first hand after Becky and Caroline visited and stayed at an AirBnb in that area and we took the tram home at 1 am 2 nights in a row.  The streets were packed with young people in every direction! Our tram was filled like it was rush hour, but there were no drunk, unruly folks- just young adults having a nice evening. We were the oldest on the tram, for sure, probably by 30 years. Alas, the Navigli area is a bit of a commute for Kevin, so we continued to look.

The area we kept gravitating to is the Porta Romana area, which I have previously blogged about.  It’s convenient to the bus and underground metro line, it feels like old Milan, there are terrific restaurants and bars everywhere, and it’s home to lots of Italians. The first apartment we visited was in Porta Romana, and we loved the apartment- 12 foot high ceilings with wonderful ceiling decorations, fully furnished, and on a terrific street where a weekly market happens.  No foreigners like us in the building, and most of the tenants own their apartments and have lived here for many years. The only drawback is that the apartment is not air conditioned, so we continued to look.  Don’t be fooled by the fact that Milan is the same longitude as New York- this place is hot and humid in the summer, and they even have mosquitos! Except for the air conditioning, this apartment checked all our boxes.

In a fit of desperation, having looked everywhere for an apartment and continuously coming up short, I called the owner of the original apartment and used my 31 years of negotiating to once again try to convince her that we would love to rent the apartment, if we could only add air conditioning.  I caught her on a good day and she said I was very good at convincing her, because she had been thinking about it for a while and she would look into installing air conditioning. I was ecstatic!  Unfortunately she investigated and concluded it would be too disruptive to the architecture of her home (this was her family home where she and her husband lived and had 3 young children), so she came back to me and said she couldn’t add air conditioning and she knew that was a deal breaker for us.

We had to really think about it, but we decided to bite the bullet and take the apartment even without air conditioning.  We are on the 3rd floor (which we in America would call the 4th floor; Italians count the ground floor as “0”  which logically makes sense, doesn’t it?),  and we have the tiniest elevator you have ever seen.  I can’t wait to see my brother Ted try to get into this elevator!  The key to get into the apartment is wonderfully old and antique looking- it’s a feat of genius to open the door, and of course the street entranceway has a small wooden door you open and duck down to get in and out.  If you need to load or unload your car, you can open the big wooden door and drive a car to the back little interior garden spot, but you drive right through the entryway, so people don’t pull their cars in very often- just loading and unloading heavy stuff, I suppose.

We have a spare bedroom too, just waiting for visitors!  Most of the floors are parquet wood, with the kitchen floor being slate (which the landlord called ‘charcoal’ in English). 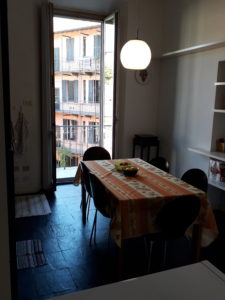 The landlord adds a wax finish to the slate floor several times a year after a good washing, to keep it from being too slippery. 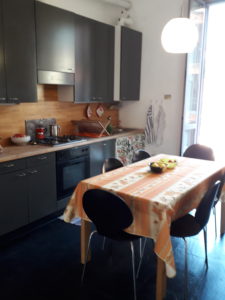 Our furnishings haven’t arrived from the States yet, and when they do, the delivery folks will curse our apartment choice.  Even the elevator, tiny as it is, is up one set of stairs.  And the stairway is pretty narrow too.  I think I will need to add a blog later to show the elevator and our stair/entry way.  And another on the recycling system!  But back to the apartment.  We packed furnishings on the assumption that we might get an unfurnished apartment, so it will be a tight fit once everything arrives.

There won’t be much room to spare, what with our clothes, 2 highboy dressers, our golf clubs, kitchen items and Lord knows what else we packed.

It was interesting trying to read and understand the lease terms (and condominium rules!) written in Italian, but with help from a kind relocation expert (ps- if anyone needs a good referral for an executive who will make a move to Milan infinitely easier, I have the person you should use!) and people from Kevin’s school, I THINK I know what we signed.

We’ve spent our first weekend in the apartment, waking up to the sounds of the fresh farmer’s market coming to life on Friday morning (starting with loud trash trucks coming through at 5:30 am), church bells ringing, dogs barking, the train line squeaking by, and general sounds of street life.  I’m not complaining- at least not yet.  I suspect we’ll get used to all the sounds of the city. My New York city friends have said you eventually settle into the sounds, after which I bet the sounds of Decatur won’t seem half as loud!

We are delighted to be here, and we have marveled at our good fortune to have this opportunity.  We consider ourselves very lucky to have found this place at this time in our lives.

Our door with the fancy key is open for visitors, and the guest bedroom needs to serve a better purpose than to be our second clothes closet! Come join us and experience the sights and sounds of Milan!

It’s springtime in Milan and that means . . .  lots of festivals. Guest blogger Kevin got a chance to experience a unique Milanese festival that is almost two thousand years old called Tredesin de Marz.    Tredesin de Marz Legend has it that in the year 51 Saint Barnabas, while preaching the gospel just outside Milan, planted a cross in a stone of Celtic origin. Yes, t...

Northern Italy In a Week!

We enjoyed our first 2019 visitor from the States in February, with one week to explore and show her northern Italy. With the visit coinciding with Kevin's winter school break, we put on our running shoes (and for La Scala, our fancy shoes!), and spared no time to...

It's time for delicious oranges from Sicily, which made me search for recipes using our ample orange supply. I came upon a traditional orange sponge cake made in Florence for Carnivale, the period before the Christian season of Lent. I quickly found a recipe in an...

If you know me, you know I tend to 'go deep' in subjects and activities when I'm inspired, whether it's learning about a particular point or person in history, or learning a new sport or activity. Friday I ventured into the world of produce shopping, right on the s...