A picture is worth a thousand words: Pinacoteca di Brera, First Visit!

In Around Milano, Culture, Museums, Sightseeing 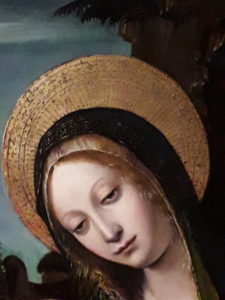 So much to say, so little space! If you love art, history, religion, Napoleon, or beauty, you simply must visit this museum in the Brera district of Milan when you come here! 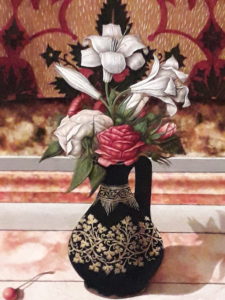 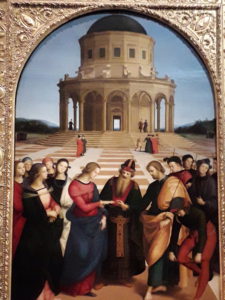 Note the blog title. I am confident that this will not be my only post in 2 years about this fabulous museum, so I’m already giving it a marker to distinguish it from future posts.  Jaws should have never had a Jaws 2, but The Godfather did alright with the second movie, didn’t it?  Same with Star Wars, right?

Let me start with some history of the art gallery, and then I’ll move to the paintings.  The Brera Gallery was officially established in 1809.  It became a museum to house the most important works of art from areas conquered by the French armies.  Unlike most of the other important museums of Italy, such as the Uffizi, Brera did not start out life as the private collection of a nobleman or prince, but because of a deliberate policy decision.  Here’s the fascinating part- many of the paintings were confiscated from churches and convents throughout the Lombardy area by Napoleon and his armies, and these confiscated pieces were then joined by other artwork from throughout the Kingdom of Italy.  There are large altarpieces and frescoes taken right out of churches and convents!

Napoleon rose to prominence during the French Revolution in the late 1700’s and dominated large parts of Italy and Europe until his fall in 1815. During this time Napoleon oversaw the defeat of several Italian territories including the old Papal State, along with the suppression of churches and convents across Italy.  During this suppression, many religious masterpieces and works of fine art were confiscated and brought to Milan to be housed and publicly displayed at the Pinacoteca.  According to descriptions at the Pinacoteca, Napoleon believed that to be considered the ruler (i.e., emperor) of the advanced world, and for Milan to be considered as sophisticated a place as Paris, a museum collection of the finest art available must be established and made available for public viewing.  There are over 500 paintings in the museum, with many others stored away.  Many depict religious themes from the 14th century forward.  Based on the number of paintings depicting the canals of Venice, Napoleon and his armies looted many churches and monasteries in the Venetian area.  I want to read more now about Napoleon’s time in Italy (including from when he was overthrown and exiled!). If you have book suggestions, add them in the comments. Of course there is copy of a bronze statue of Napoleon in the square of the Pinacoteca, depicting Napoleon as the god Mars.  If you are the emperor, you can be portrayed however you want! 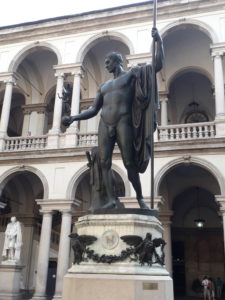 I can’t possibly explain all that I saw- we were there for 3.5 hours and I could have stayed there for days but Kevin was getting cranky and hungry.  I like to read all the descriptions associated with the paintings, as most of you would wearily believe, and I would love to study more of the art history.  Here are a few bits of information I found fascinating on my first visit (these are generalities and of course these ‘rules’ of painting changed over the ages and throughout the land): 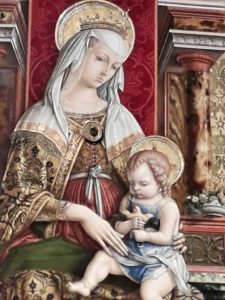 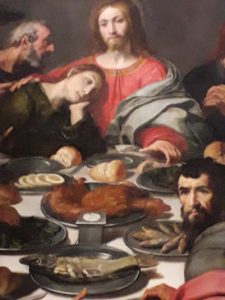 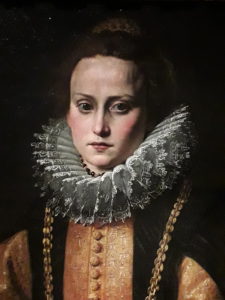 The paintings I have chosen to include here are simply a sampling of some that Kevin and I particularly enjoyed.  Look at the food in the still life. 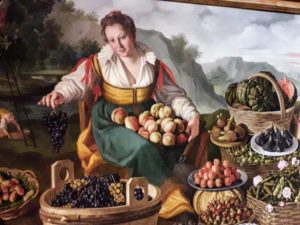 Observe the intricate details portrayed in the painting of Venice. 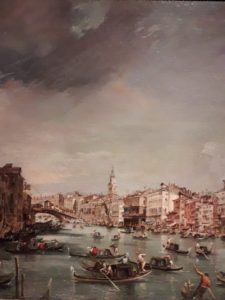 View the landscape of the Lombardy region from 16th century. 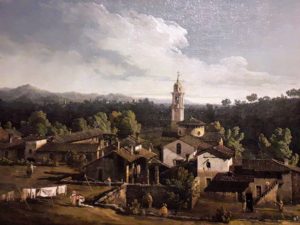 See the painting of Mary with Jesus as a baby, holding an animal with the body of a cat, but the head of a lamb. 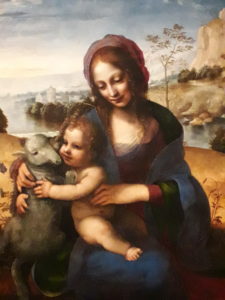 I hope you will visit and enjoy this museum as much as I did. After reading this entry, Kevin said I’m a nerd.  True, but he knew that when he married me!

Fun at the Fondazione Prada Museum